We know that My Miami Tesla is recognized for premium car wrapping, paint protection, and top enhancement services for Teslas. Still, when Shmee, a famous car enthusiast and YouTuber from the UK, paid a visit to drive a custom Tesla Model Y, he certainly put the car and the paint protection film to the test.

Tim, better known as Shmee150, started his passion for cars when he took a Ferrari 458 Italia and Lamborghini LP670-4 Superveloce onto the road. After filming these impressive cars and posting them onto Youtube, the brand Shmee150 was born. Today, Shmee is a world-renowned luxury car enthusiast who is a household name among the largest international automotive companies. 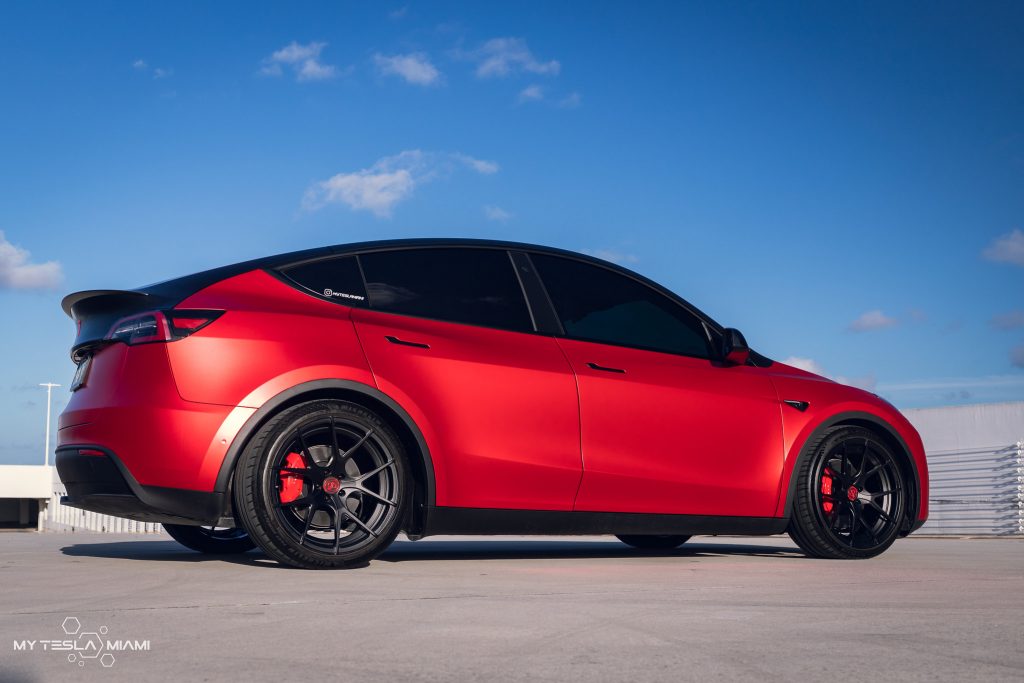 A Visit to Miami to Test Drive the Model Y

The crew at My Tesla Miami was pleasantly surprised when auto specialist Shmee traveled all the way from the UK to Miami to test drive one of their customized Tesla Model Y vehicles. Shmee had his own 2020 Ford GT500 wrapped at sister company, First Class Autosports, and as part of expanding his auto experience, he decided to catch up with the My Tesla Miami team to determine whether he would be adding a Tesla to his future performance car collection.

When Shmee first arrived at My Tesla Miami and spotted the Model Y parked outside the garage, he was excited by its custom wrapping and unique paint protection film. He praised the crew for the carbon fiber finish and precision customization from the roof to the wheels. This even before stepping foot into the vehicle to take it onto the road! And that’s saying a lot coming from a luxury auto specialist with a Ford GT500 under his belt!

While at My Tesla Miami, Shmee had expressed his interest in the range and the fact that the smaller Tesla Model Y could do a whopping 0-60 mph in 3.5 seconds. His only gripe was that Tesla performance cars “lacked options,” which is part of the reason he made the long trip to My Tesla Miami.

The Tesla Model Y is available in standard colors or styles that lack personality and create a powerful sports car impression. He did appreciate the precision modifications to the Model Y by the team at My Tesla Miami. Shmee decided to zoom in on the customization for the performance Model Y in his video before taking the vehicle out for the performance road test.

In his review, he describes how the Tesla Model Y performance range offers 456 brake horsepower and comes in 5 standard colors, different wheels, a carbon fiber lip, and only two-color selections for the interior, white and black. Its latest addition is a 7-seat configuration and tow hitch, but that’s as much customization as Tesla offers. During filming, Shmee walks around the Model Y and emphasizes his preference for the satin chrome red wrap and the carbon fiber finish on the bonnet and mirror caps. This includes the durable PPF to prevent scratches and chips from damaging the paintwork. He also references the 21-inch wheels that make the car stand out and feel more exclusive.

After opening the vehicle door to reveal the interior, Shmee goes on to describe the custom touches by My Tesla Miami, including the new steering wheel with carbon wrap for the inlays and the central console.

Along with his performance test of our Model Y, Shmee decided to get his 2020 Ford GT500 custom wrapped by our sister company, First Class Autosports. He wanted something exclusive and that would protect the paintwork of his lime-green GT500, so he opted for the SunTek paint protection film (PPF). This film has self-healing and has moisture repellent properties making it the perfect choice for protection against scratches and water beads.

While the Model Y needed the My Tesla Miami touch to create its unique look and feel, Shmee decided on his own exclusive finish to his Ford GT500 by adding the SunTek black racing stripes to the front of the sports car. This was enhanced by a unique choice of red accent vinyl to complement the scarlet brake calipers. 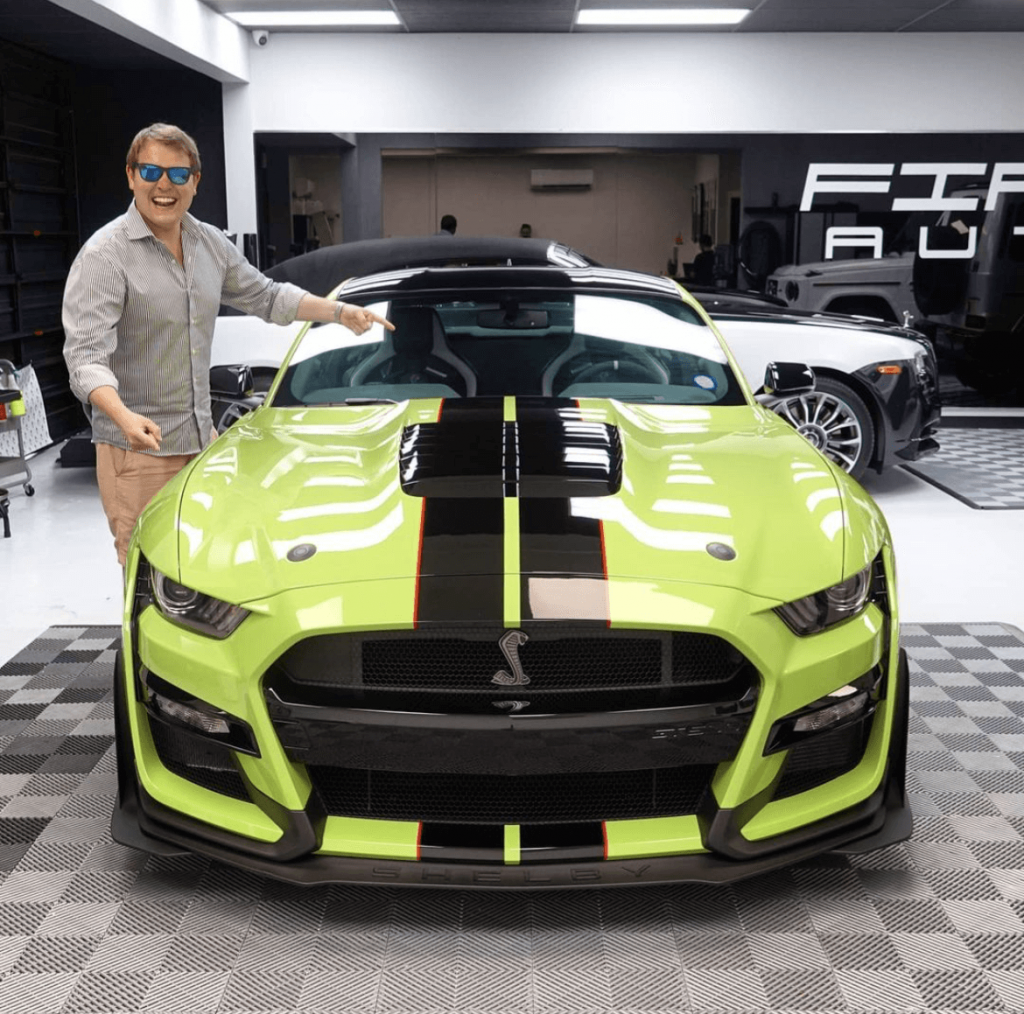 At the end of the day, Shmee was impressed by the modified appearance and the performance of the Tesla Model Y. He was also thrilled at the chance to film his Ford GT500 getting wrapped. Now he’ll definitely have peace of mind his luxury sports car will be protected against chips and scratches cruising down the highway during his USA tour or competing on the track.

Thank you Ricardo for your continued support! Enjo

Welcome to the family Pedro! Thank you again for t

Happy 2023! we thank you for choosing our business

One of the last projects of 2022, Satin Battleship

Happy Friday! We are in love with this new project

GOT QUESTIONS ABOUT PPF? GIVE US A CALL TODAY

WHAT OUR CLIENTS SAY

Previous
Next
Louis Fiore

Read More
Brought my Model 3 Performance in for work, Hugo and his team are extremely professional in their work, and transparent about everything they are doing. They treat your car as if were theirs. Highly recommend them, definitely will be going back for some more work! Thanks guys
Robert Real

Read More
What a great outfit. The owner Hugo and his staff are passionate about their work. They are perfectionist. My 2014 Tesla needed a major face-lift. I opted for the ceramic pro package, gloss black chrome deletion, powder coated wheels and center caps, added red accents and emblems. They delivered as promise and no hidden fees or surprises. No doubt they are First Class!
Mario Hernandez

Read More
Great Tesla Model 3 Tints. Hugo and his team provided excellent customer service. They did the back window of the car with one large sheet (which is the best option for the Model 3). I was very happy with their service.
Previous
Next
READ MORE TESTIMONIALS

VISIT THE MY TESLA MIAMI SHOP

My Tesla Miami is an independent company not affiliated with Tesla Motors. Inc or its subsidiaries. TESLA, TESLA MOTORS, TESLA ROADSTER, MODEL S, MODEL X, MODEL 3 and the “TESLA”, “T” and the “Tesla flag” designs are trademarks or registered trademarks of Tesla Motors, inc in the United States and other countries